Breaking News
Home - news - “Tourism Trade and the Seychelles Business Community thank you” says Minister Alain St.Ange and Sherin Naiken, the CEO of the Tourism Board

“Tourism Trade and the Seychelles Business Community thank you” says Minister Alain St.Ange and Sherin Naiken, the CEO of the Tourism Board 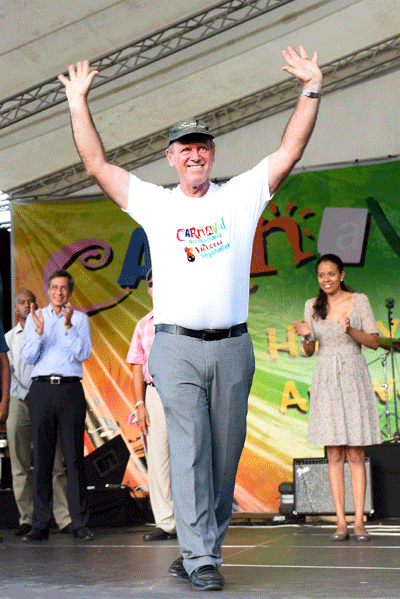 Minister Alain St.Ange saying thank you to the supporters of the carnival at the 2015 edition of the Carnaval International de Victoria

Minister Alain St.Ange, the seychelles Minister responsible for Tourism and Culture joined Sherin Naiken, the CEO of the island’s Tourism Board to say thank you to the Seychelles Tourism Trade and also to the Business Community for the great support for this year’s edition of the Seychelles Carnaval International de Victoria. “It is the first time that so many tourism players, large and small, and also the island’s business community have come forward to offer assistance for the coming Carnaval International de Victoria” said Minister St.Ange and Miss Naiken.

The 2016 edition of the Carnaval International de Victoria will be held from the 22 to the 24 of April and for the first time their has been an overwhelming support by the island’s businesses. “We were overtaken by the small hoteliers who arrived at our offices with their financial contribution as much as we were pleased by the support by the larger members of the Seychelles Tourism trade. This support by individual hoteliers and other tourism trade players were further increased by the support received by the island’s business community. It is clear that the visibility Seychelles gets and continues to get through such an event has been recognized by our industry” said Miss Naiken.

This year the Press Conference ahead of the carnival will take place on the Thursday the 21st April and will coincide as the film premiere of the new 3-D Aldabra Film. This press conference will also be the opportunity for those who have supported the event to mingle with the 125 press and media houses flying into Seychelles to cover the carnival.

Twenty International Delegations are flying into Seychelles to parade alongside the Seychelles floats. The International Delegations will have all the best and most followed carnivals namely:- Brazil, Notting Hill of the UK, Dusseldorf Carnival of Germany, Italy Carnival, Indonesia Carnival and for the first time the France Carnival and the Cologne Carnival of Germany.