PARLIAMENTS IN THE THIRD REPUBLIC OF SEYCHELLES

On 3 December 1991 at the Extraordinary Congress of the Seychelles People’s Progressive Front (SPPF), It was announced that the People’s Assembly would be voting on the registration of political parties to facilitate the return of multiparty democracy. 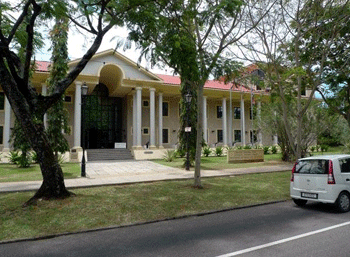 On 23 July 1993, under a new constitution, the first multiparty Presidential and National Assembly elections were held.

It was to be the first  since the system which prevailed during the colonial era .

That system had always been condemned by the SPUP (now Seychelles’ People’s Progressive Front).

For the first time in Seychelles’ history  a proportionately elected multi-party system was to replace the ‘first past the post’  which gave the SPUP in 1974 only two (2) seats with forty eight per cent (48%) of the votes while the SDP (now DP) obtained thirteen (13) seats with fifty two per cent (52%).It was the last election before independence.

The SPPF won a landslide victory (21 out of 22 constituencies) in the 1993 election which was described as ‘free and fair” by all the international observers.

Of the political parties that took part only three (3) gained seats—the SPPF obtained an additional six (6) with the proportional system making a total of twenty seven (27) seats, the Democratic Party (DP) winning in one constituency with an additional four (4) had a total of five (5) seats while the United Opposition (Parti Seselwa, National Alliance Party, Seychelles National Movement) had one (1) proportional seat.

The unicameral House of Parliament had a total of thirty three (33) members who could not be accommodated in the small room at the National House. 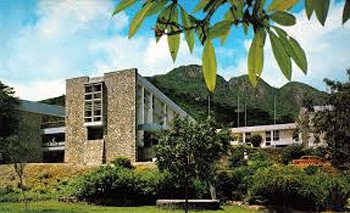 It was then that it moved to the National Library Building and got new facilities such as offices for the Speaker, the Deputy Speaker, the Leader of the Opposition, a Conference and Committee room and the Secretariat.

The Speaker was Honourable Francis Macgregor and the Deputy Speaker, Honourable Shelton Jolicoeur.

In his book,”A Parliamentary History of Seychelles” (2004) the Speaker noted the following amongst the many other interesting facts and anecdotes: 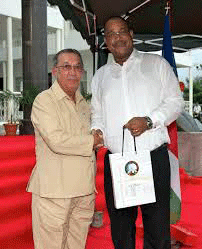 The motion was carried!

harassment from his own party, the DP.

Another incident came on Armistice Day, November 11 1997, when Honourable Ramkalawan assaulted Honourable Barry Faure in the corridors of the National Assembly.

The Parliament met for a very short while in 1998 (from 2nd to 19th February) as the President of the Republic dissolved the National Assembly under Article 110 of the Constitution of the Third Republic.

The SPPF won twenty four(24) of the twenty five(25) electoral districts  The St. Louis district went to  the Leader of the United Opposition(UO),Reverend Wavel Ramkalawan ) while the DP(Democratic Party) did not win any seat. Nine (9) new members were returned.

Honourable Francis MacGregor was re- elected Speaker of the National Assembly with the Deputy Speaker, Honourable Shelton Jolicoeur.

The National Assembly Member’s Emoluments Amendment) Bill of 1998 raised the Leader of the Opposition’s gratuity to that of a Minister.

In 2000, a fifth amendment to the Constitution of the Third Republic was approved making provisions for the President to appeal for a fresh mandate.

On 31 October of the same year the Action Group of the Seychelles Women Parliamentarians was launched.

Seychelles ten (10) women members of Parliament in 2002 brought the National Assembly to the ranks of legislatures with the highest proportion of women in the world with South Africa and Mozambique on the continent.

The cost of living is said to have been persistently debated during the sessions.

not take place at the same time as the National Assembly elections.

Three(3) political parties, the SPPF, the SNP and DP filed in candidates in the twenty five constituencies while the Seychelles Democratic Alliance(SDA) ,launched on 11 April 1999, presented one candidate in the Beau Vallon constituency. An independent candidate contested the St Louis seat as well.

The SPPF got another five (5) proportionally elected members while the SNP obtained four (4).

Both the Speaker, the Deputy Speaker and the Leader of the Opposition were re-elected. 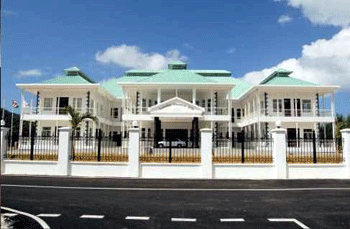 On March 20, 2007, after a six-month boycott by the SNP (Seychelles National Party), the National Assembly was dissolved by the President of the Republic.

The DP member Honourable Frank Elizabeth lost his seat when the coalition broke up.

The most recent development was a bye election after the resignation of the elected SNP member of the Mont Fleuri district, Honourable Jean-Francois Ferrari. The SPPF did not take part in the election contested by the DP candidate and Mr. Ferrari who was voted back.

2015-09-10
Georges
Previous: Seychelles working mission in Brazil finds a successful first day full of press meetings with the support of Emirates
Next: Brazil Carnaval meets Seychelles Minister and confirm continued support for the unique April ‘Carnaval of Carnaval’ in Seychelles