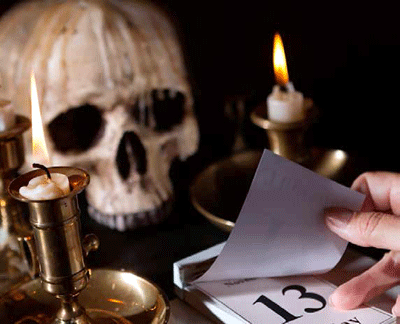 13 is considered an unlucky number in many cultures.

Seychelles culture is rich in mysteries and stories, most of them passed on from generation to generation. Among the most popular are superstitions.

Some superstitions in Seychelles border on hygiene issues. “You should not wash your hands too often” an elderly gentleman said “if you keep washing your hands, you wash away all your money, it all goes down the drain”. TODAY wanted to know the acceptable frequency and he gave an example “for example if you use the toilet to just pee, no need to wash your hands, you should just wipe it.”

Other beliefs seem to centre around keeping children in check. Whistling in the house is bad luck, or playing with fire will result in wetting your bed. A lady accustomed to cleaning her house early in the morning told us “I always tell my children that they should not sweep the house after six in the evening, they will sweep all their money away”. It is interesting how such anodyne things can be linked to superstition, and even more interesting how many are linked to money.

Interestingly enough some superstitions are cross cultural. Not sweeping the house in the night is one of them. The Islamic faith apparently also says that a person should not use a broom at night.

Believing in astrology and horoscopes is also considered a superstition and this is something that possibly millions follow. Some people cannot get out of their house without first checking their horoscope. A young man swears by his horoscope reading to make every decision in his life. “I am one of those who if I have been given an appointment for a certain date, I can ask them to change the date solely based on if the numbers are not right.” He went on to explain how once he had forgotten to check his horoscope and had been given a date for a job interview. He said the day before the interview he called to change the date because his horoscope said it was a bad day for it.

Suffice it to say that being very superstitious can cripple a person’s daily life. The Catholic faith, the most popular in Seychelles, considers superstition sinful in the sense that it denotes a “perverse excess of religion” and a violation of the first of the Ten Commandments “Thou shalt have no other Gods before me”. However, there are things that some Catholics do that go against the idea that they are antisuperstition.

A common practice among many Roman Catholics in Seychelles is using small statues, medallions or charms as a form of protection or for special favours. For instance, burying a statue of St. Joseph upside down is believed to help you sell your home faster, because apparently St, Joseph is irritated to be in such a position and would like it to end immediately. Carrying a St. Benedict medal is also supposed to keep a person from sudden death. There are many kinds of superstitions.

Other faiths also have their own superstitions. Some Islamic believers think that whilst the marriage contract is being written, a person; the groom or bride; should not interlace the fingers or crack their knuckles as this could cause problems in the marriage later. Or if a pregnant woman eats too much pepper during an eclipse the child would be born with a round black mark on their lip.

Friday is also considered an unlucky day in many cultures and it is said that starting a project on a Friday is bad luck and one can expect to encounter all sort of incidents relating to it. Numbers are notorious in taking luck. The number thirteen is dreaded by many; couple that with a Friday in the western world, then it is likely to cause havoc and keep people in bed, paralysed by fear. It is such a debilitating fear for some and so serious that it has been given a name “ friggatriskaidekaphobia “.

Seychelles culture is riddled with many other examples of superstition that you must have heard of in your own home. Dropping a fork during dinner announces a male visitor, a spoon announces a female visitor, eating from the pot will cause it to rain on your wedding day; part of the things that add spice to different cultures.