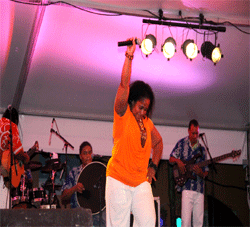 Started singing at a young age.

Under the direction of Mr. Andreix Rosalie.

He was also the Director of Youth League.

Red Berets performed for the opening of the play ground. Performed alongside many groups and it was a big group with 13 musicians including 3/4 female vocalist.

-In July I participated in Festival Le Miel Vert in Reunion

=Musical show on the childrens playground.     –

live in Seychelles,Madagascar,Reunion and Mauritius

Which have became part of our cultural heritage.

-25th August= Musical show in Mauritius with participation of artist from Pakistan,

*I was awarded the best outstanding performance in the U.First

including Kawak , Adzin Nourri and Regis Delorie from Seychelles.

-1st May = Musical show in Rodrigue to celebrate the labour day.

accompanied by a group from the Island MIGHTY GUYS.

-16th May= Participate in FESTIVAL DUNIA in Madagascar with

Participation of artists from the Indian Ocean Island.

-23rd May =live interview on Kreol plus Reunion.

-30th May =Show with Kim Djaml and Marie-Josee Couronne.

Continue with promotion of my album.

We performed mostly everyday in hotels, live shows and represent Seychelles to promote our culture in other countries.

Such as Reunion, Spain ,Rodrigue ,Germany , Mauritius to name a few.

L’echo group provide Cabaret show also where we demonstrate our talent in our traditional and modern dance also.