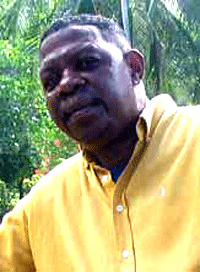 A couple of days ago  our popular singer Essay Quatre gave a commemorative concert at the ICCS to mark the 42nd year since he first burst on the local scene in 1974. TONY MATHIOT met up with him as he was finishing his preparations for the show.

So, let’s give Essay his due. He’s supremely entitled to be proud. Forty-two years in the creole music business is certainly a mean feat to achieve. And at only sixty-years old, Essay is definitely not contemplating on composing his swan song yet. He’s looking forward to his Golden Jubilee…in eight years time!

Curiously enough, he is one of those rare examples where the second name gains precedence over the first name- and actually it’s not even Essay- we’ll come to that shortly.

Julien Esse Quatre was born on 18th July 1955 at Mont Fleuri. He attended primary school at Plaisance and then moved to Victoria to follow his Secondary Education at the St. Dominique Savio, a school for boys that the Catholic Mission had opened in 1966.

“I was not a star student” he assures me in that baritone voice that I first heard when I was a teenager “I could cope fairly well with all the subjects – well enough to keep my parents and my teacher happy. Anyway, I had a cousin who had a guitar and it was a privilege when I could borrow it. I was more anxious to learn how to play the instrument than I was with learning the academic subjects.”

For Essay, there was no vacillating about which vocation to embark upon. The day he jettisoned his school uniform he knew what he would be doing for the rest of his life. 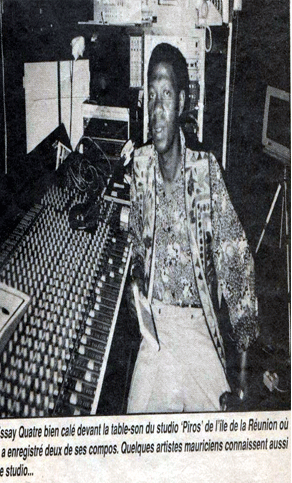 “By the time I was seventeen, I could handle a guitar like a professional. I could sing and play creole songs that were popular on the radio.”

So he teamed up with David Philoe, another young and aspiring local singer, and for a couple of years they made the rounds of the popular nightclubs that Victoria had to offer: Shakara, City, Gardenia, Green door…. Strummin’ and singin’ David’s compositions.

In 1974, Essay immortalized his first compositions on Vinyl- he released his first single < Pa dormi avek pei > – It was actually an EP (Extended play) record containing four songs – two on each side. Fitting advice from a nineteen year old lad, in view of the circumstances that existed then.

The early 1970’s was an ebullient period for Seychelles- political, social and religious: political rallies, a fledging tourism industry, the advent of disco, the consecration of the first Seychellois Catholic Bishop and the opening of the first modern cinema building in Seychelles (Olian Cinema). So many things were happening simultaneously. And Essay was ambitious.

“It was for the release of my first single that I made the modification with my second name.” He explains. “I felt that ‘Essay’ looked better than ‘Esse’ for me as a recording artist.”

Would you argue?! While his songs received massive airplay on Radio Seychelles, Essay performed at weddings and entertained guests at various tourist establishments. He performed solo, as part of a duo and in various bands. He was in ‘The Vipers’ together with Roch Moncherry. Then he played at various venues on Praslin. He performed with Harry Prempeh and the Volta Sounds at Shakara, a night club that was located on the top floor of the STC building in Victoria.

By the time his second single ‘La Richesse nou pei’ was released in 1975, he was a household name. In 1976, he released three more singles: Offer l’amitie, En vrai lalimyer and Linite parfait. The latter was an outlandishly funky number – an uninhibited mix of jazz rock and Seychellois Sega. Forty years later, it remains one of Essay Quatre’s best known hits. 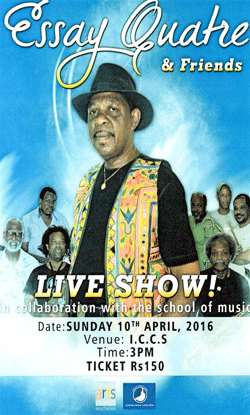 During the early 1980’s, he played with Patrick Victor at the hotel establishments, giving visitors from the metropolitan cities of Europe a veritable taste of traditional Seychellois music. In the early 1990’s he recorded his songs in the state – owned Veuve Studio at the Children’s playground. Those were the days when cassettes were becoming obsolete and Cd’s was a novelty. One of his last cassette was Losean Endyen, which he tells me, was a ‘malogae – sega maloya’, and Jeux des Iles, a French sega song that was his anthem for the 1994 Indian Ocean Games that Seychelles hosted.

The 1990’s was a busy time for Essay. It was a decade of accomplishments. He released a cassette or a CD practically every year. He traveled to Mauritius, Kenya, Madagascar and reunion. His 1995 ‘Welcome to Paradise’ Cd was released in Germany for the European Market. In 1999, he was a star performer in Rodrigue’s First Creole Festival. That same year, during the third week of October, his song Lafet dan pei Kreol was played every morning on SBC Radio as Song of the Week. It was his patriotic contribution to the 14th Creole Festival. It was also the year when the first Essay Quatre and Friends concert was held at the International conference centre on October 1st during the Tourism Week. The ‘friends’ included  Jean Ally, Jany de Letourdie, Barney Adeline, Octavie Prosper, John Wirtz, Jimmy Servina, Maureen Mussard, Ketty Melanie – a marvelous combination of up- and-coming singers, music amateurs and national icons, united together (Linite parfait ?) for the biggest musical concert ever seen in Seychelles.

“It was a sensation” he recalls. “We were backed by a band called La Flanm made up of musicians and dancers. The concert also featured a show by Mangouya Studio. Tickets cost Rs75 per person and there was a raffle sponsored by Air Seychelles. It was a superb evening.”

“It’s going to be another superb evening, soon.” I joined. I detect cheerful enthusiasm beneath his characteristic composure. “I would like it to be an evening of fun.” He says. “It’s going to be a review of all my songs. I will derive much pleasure in performing them as the public will get in hearing them.”

Last year, he participated in the District Cultural Awards. ‘ Mont Fleuri  ‘ song was a fabulous winner, and will definitely feature on a prospective CD.

Tomorrow night will certainly be a thrill. The show will be a musical ‘Essay’ that proves that music can transcend the divide of generations.