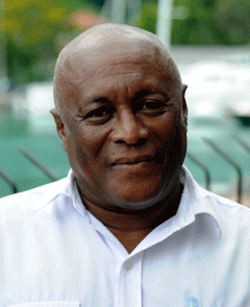 But the man has lived through some momentous occasions in the history of our islands, witnessing the arrival of the US military on Diego Garcia prior to their implanting one of the largest bases in the world, and also the birth of party politics here.

I first got to know Wirtz in 1970 on his return from Diego and after he had already recorded some songs at Radio Seychelles. The late Gilbert Confait played a key role in getting many of our emerging singers, such as Wirtz, Despilly William and the late Champsy Accouche, to record their songs at the radio, from where it was played very often and soon won them many fans.

Until then, the only Seychellois who had made any recordings to speak of were Stanley Beaufond, who had started playing with a band in Kenya, and Mickey Mancham and his Buccaneers.

Wirtz had already recorded such songs as Anolia, Lakwizin Ton Paul, Pti Manmzel lo lans and several others which became the hits of the day.

We worked together as clerical staff of the cooperative department, which held the management of about a dozen copra societies, a shop at Baie Ste Anne and a furniture cooperative at Huteau Lane. Part of our duties was assessing the copra and vegetables, which had gone rotten and destroyed.

But that was not Wirtz’ first involvement with copra. Though, he was doing fairly well on Mahe and getting rather popular, in 1968 Wirtz sailed to the Chagos archipelago for a spell on the outer islands – driven by his love of adventure and exploring the unknown.

Later, he worked for a while at the Seychelles People’s United Party (SPUP) office as messenger and also helping to print and distribute the party newspaper The People.

Wirtz remembers working alongside some persons who later took up key positions in government, such as Guy Sinon, his wife Rita, who was also secretary to the party’s leader France Albert Rene, Philibert Loizeau, Mathew Servina and Sylvette Pool. By then, a rival political party, the Seychelles Democratic Party (SDP), led by James Mancham – who later became the country’s first President – was also on the scene.

It was when Mr Mancham was Chief Minister that he organised a tour of Mauritius for Wirtz, Despilly and Mickey and his Buccaneers. There he met Mauritian Prime Minister Rangoolam, but above all he was happy to meet Serge Lebrasse – Mauritius’ first sega singer.

Life as a musician

On Mahe, Wirtz played in a band owned by another party official, Rifned Jumeau, and called ‘The Wheelers’.
He later joined France Lagrenade in the ‘Folk Melodie’. Lagrenade, who later emigrated to Australia, played the saxophone, while George Moulinie was on the trombone and piano. The group played mostly at the Seychelles Club, Rocco Restaurant and at weddings.

Though the Chagos were owned by Mauritius, its management was contracted to a Seychellois company Moulinie & Co. For one and a half years, Wirtz lived on the main island called ‘Grande Terre’, where the main port was then located –‘Pwen de les’. He picked coconut and heated the ‘calorifers’. For a salary of R25 a week, he was expected to pick and de-husk 5,000 coconuts, which also earned him a bonus of R14.50. 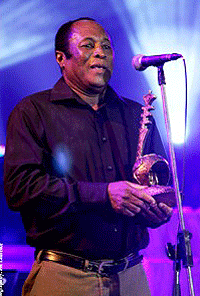 The Seychellois manager was the late Reginald Payet, who had 10 children. Wirtz also recalls the Alexis family, one of whom, Jeanette, later became chairperson of the Chagos social committee, fighting for the rights of Chagossians to return to their island home.

It was on Diego that Wirtz purchased his first guitar from a visiting yachtsman and entertained, singing his compositions with another man playing the triangle and another beating on an empty barrel or crate to get the islanders dancing the night away.

While on Diego, Wirtz witnessed the arrival of the Americans on warships and yachts, who surveyed the main islands of Diego, Peros Bandos and Salomon. Diego itself is about 60 miles long, enclosing a large lagoon and Wirtz remembers that the sea in its north-west was rather deep, which is where he figures the big base is sited.

It was on his return to Mahe – he was fired in Diego after fighting with a fellow worker – that Wirtz took up a job with government and also joined the band ‘Les Boys’ owned by Antoine Kim Koon or ‘Tai Tai’. Wirtz played and sang alongside Georgie Romain, better known as ‘Pye’. Perley Hoareau, now in Australia, was the lead guitarist, Antonio Mend was on bass, while Koubwa and Joyce Roucou alternated as drummer and playing the triangle.

Until then, Wirtz had composed many songs, often recorded by and played on Radio Seychelles. But, it was with ‘Les Boys’ that he first produced his own records which were recorded at the rate of – two daily – by Marcel Fayon. One of the records featured the Enerdale – the oil tanker which sank off Mamelles island in 1971 after striking an uncharted rock. 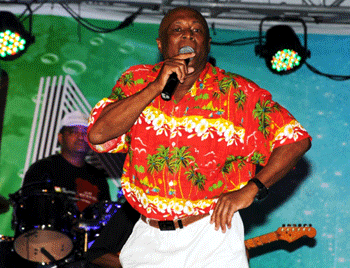 With his usual wit, Wirtz remembers singing about fellow musician ‘Koubwa’ whom he said floated like ‘dibwa albizya’.

That was in addition to playing in the districts – Anse Royale, Takamaka, Anse Boileau – and occasionally Praslin and La Digue.

A turning point in Wirtz’ life was his wedding to Flossie Micock, a teacher of Bel Ombre in February 1971, who ultimately bore him a girl and three boys. Three have children of their own, making Wirtz the grandfather to three boys and three girls.

Married life necessitated scaling down his musical activities and he joined the public health division, being attached initially to the entomology section.

Wirtz says he later moved to environmental health where duties involved mostly inspections of meat at the abattoir and food establishments, such as bakeries and hotels. Wirtz remembers that among his colleagues at the public health division was Dolor Ernesta, who later became a cabinet minister.

Wirtz also spent several years in the militia, patrolling the beaches at night. He rose in the ranks to be section commander of the northern region. He remembers that among fellow militia members were Macsuzy Mondon, presently Education, Employment and Human Resources Minister, and Rene Morel, the principal secretary for information.

Wirtz later moved to the Seychelles Marketing Board (SMB) in charge of weevil and rodent control.

At 62, he still composes the occasional song, but is reluctant to produce any CDs. He claims that he is put off by the expense – an average R2,000 per song to pay the band and recording studio. That works out at R20,000 per CD.

“People waiting in the wings to copy your hard work and make money from your sweat is another sure discouragement,” according to Wirtz.