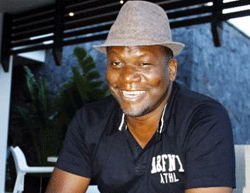 Julius Cesar famously remarked: “I came, I saw, I conquered.” Looking back on his trajectory in life, Jean-Marc Volcy, 47, could paraphrase the Roman emperor by saying:  “I came, I saw, I concurred.”  For like Cesar, Volcy also was out to conquer something but unlike the Roman Emperor the Seychellois artiste was not seeking territorial conquest but instead international recognition of Creole music from Seychelles.

Volcy’s long and lasting love affair with Creole music took the form of a battle, as he had to shrug off the penchant he first had for sports before music could settle in his heart. The fight continued as he had to ward off the nagging call of foreign beats and throw in long hours of research, on and off field, before he could master musical instruments like the guitar and Banjo and crack the code of Creole music.

The universe seems to have conspired to get Volcy to champion the cause of Creole music  as his life unraveled through a set of facilitating circumstances and chance encounters with just the right persons at the right time propelling him to stardom and Creole music to fame.

It was on January 29, 1966 that Volcy, the first child in a family of  3 girls and 4 boys, was born in the tiny village of Dan Sed, which is part of a zone known as Dame Le Roi in the district of Baie Lazare in the south of Mahe, the largest island of Seychelles. Historically famous as the spot where Frenchman Lazare Picault, leading  an expedition, landed on 29 November 1742 in what was still an uninhabited archipelago. 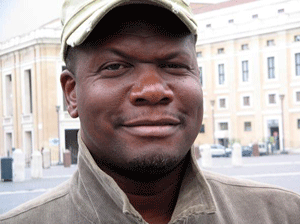 Baie Lazare is also renown as an agricultural breadbasket of  the country.  This district is home to a strong community of farmers, concentrated at Dame le Roi and Val D’Andorre, enaged in market gardening producing much of the fruits, vegetables, root crops and livestock that goes into feeding the population of Seychelles and the army of tourists who visit this top holiday destination every year. But Baie Lazare, boasting the tallest religious building in the whole country (the Francis of Assisi Roman Catholic parish church) is equally reputed as a cultural hive, being home to a great number of the country’s top artists plying their talents in music, singing, painting, sculpture and craft. It is surmised that Baie Lazare is the district with the highest density of artists in Seychelles. This heartland of what was formerly, colloquially, known as ‘O’van’, meaning the rural part of Mahe, offered Volcy the  ideal  environment to become sensitive to the vibes of the Creole culture.  The young Volcy would have an additional blessing in the form of family members who honed that sensitivity into a calling and friends who helped him acquire the necessary skills and talents and build his self-confidence before stepping on the musical stage.

Still an infant, Volcy was adopted by his grandmother, who he affectionately describes as a “loving, protective but strong-charactered person”, after his mother married his step-father and went on to start a new family. His upbringing by his grandmother, Felicite Volcy born Dogley, will be a decisive factor in his success as an artiste later in life. Close to his grandmother whom he will follow practically everywhere she went, Volcy will develop a keen interest in the jargons of the elderlies, as it was the way his grandmother and her peers will converse, as well as in old stories which these folks will recount. Many of his songs which became hit overtime borrow heavily from these jargons known as “paroul gran moun”, and these old stories stoke the lyrics of many of these songs. Other family members who had a big influence on the younger Volcy were his auntie, Antonia Volcy, and his uncle Jeris, a seasoned musician who played the guitar in the band backing well-known artiste Hudson Dorothe.

But these Creole vibes in the form of old stories and jargons did not crystallized into musical productions until much later as at school the young Volcy was much more interested in sports. Developing his muscles trumped nurturing his artistic skills. Sports were the priority and music was placed on the back burner.  It was after he completed his secondary education in the then Form III at Baie Lazare School that he switched to music. The aged 15, Volcy developed a liking for the guitar and musical explosion during that period (in the early 1980s) provided him with that very impetus he needed to turn his hobby into something more serious. His school mates had joined the now defunct National Youth Service (NYS) which was a nursery for budding young talents, including musicians. Volcy self-taught himself the guitar and later picked up new styles from his former school mates. But something singled out the budding artiste and that was his tenacious love for Creole music. “Contrary to other youngsters who learnt the guitar by playing foreign beats, I chose Creole songs and the first song I learnt to play was Ti Kreol Leo by Joseph Louise,” recalls Volcy.

The 1980s being a period of musical explosion and revolutionary spirit in Seychelles, Volcy jumped on that bandwagon when he joined the cultural troupe of his home district then under the leadership of veteran musician Thomas Alexis. Since there was a plethora of guitarists in the troupe and no one to play the Banjo, he volunteered to learn this instrument and in no time had mastered it. One of the songs he composed during his days with the district cultural troupe is entitled En Nouvo Soley which feature on a CD of revolutionary songs. Then opportunity knocked again and Volcy seized it.

As he was turning 20, the newly created national cultural troupe went on a tour of district to recruit new talents. At the audition Volcy decided to show the jury panel, which included renown artistes Patrick Victor and Leon Radegonde,  that he could sing as well as play the guitar and banjo. He surely impressed the jury as he was the only one recruited from Baie Lazare to join the Seychelles National Cultural Troupe.  It was during his days with the country’s national cultural troupe that Volcy unveiled another facet of his artistic talents, acting, when he took part in plays and composed music for musical like Sanmdi Swar lo Zil Sen Pierre, O Seselwa and Sega of Seychelles. But acting was just a side thing and will in no way interfere with his passion for music as now as a full-time member of the National Troupe he had the time and back-up to devote to research which greatly enriched his knowledge of Creole music, from kamtole and moutya to tinge and sokwe and makalapo, as well as enlarged his repertoire of Creole songs.

Two ground breaking events will take place during his time with the National Cultural Troupe which undertook many trips abroad promoting the Creole culture and Seychelles as a tourist destination. The first took place in 1990 during one such promotional tours in France. Invited at the Festival de Florealie by the French Charente-Maritime department which was hosting the event, the Seychelles Cultural Troupe put up many performances in different spots in the city. Playing mostly kamtole songs, Volcy along with his friends attracted large crowds where ever they went but  the keen-eyed Volcy did not fail to notice that there was a group of people who followed them where ever they performed. Volcy, pointed this observation to a fellow band member, adding” This shows that there is something appealing in our music.”

Upon his return to Seychelles, Volcy would undertake to crack the code of that “something appealing” in Seychellois music. His search led him to the most important boost in his musical career. During his research work, a work colleague,had learnt about an old man living at Bel Ombre who could have something of interest to Volcy. The old man had promised that he would share his knowledge on condition that Volcy and his colleague bring him two bottles of Guinness.

Bel Ombre, in the northern part of Mahe, is home to a large community of fishermen  which is world-famous as a place believed to be where the famous 15century pirate La Buse buried his bounty. It was there that Volvy found a treasure in the form of a moutya song relating to the drowning of some women on some outlying islands on Good Friday. Sipping his two Guiness, the old man at Bel Ombre sang out  what Volcy will later fine-tune into the award-winning Vandredi Sen.  “The moment I heard that tune, I realized that it would become a hit,” recalls Volcy who went on to win the First Prize in the African Category of the international song competition sponsored by French radio Radio France Internationale (RFI) in 1993. Released together with the song ‘Lanmizik GranTer” which is Seychelles tribute to the African continent, Vandredi Sen was a sensation at the prize-presentation concert in Bamako, Mali. The song, which had cost Volcy two Guinness, struck a deep emotional chord with the crowd in this western African country where the public gave a standing ovation to Volcy.

He went on to win the Kora, a song and music competition for the whole of Africa, with another hit ‘Voule Vou Danse.

Vandredi Sen had the effect of a bombshell in Seychelles’ cultural landscape as the Seychellois suddenly realized that they had a rich cultural heritage, palatable to foreigners.  The Seychellois public took ownership of that song as it boosted their pride and sense of identity.  It gave a fillip to local production of Creole music as overnight compilation of Creole songs under the label of Top Creole were cut and were selling like hot cakes.  Volcy had made his mark and went on to produce eight albums and staging many performances.

Besides upbeat traditional songs (which are not only folkloric as he has added words to some of the songs, including the famed Vandredi Sen, putting his personal touch to them), Volcy also has a vast repertoire of romantic songs. Indeed, it is worth mentioning that the first song he ever wrote as a teenager was  Dir Mwan expressing his exasperation about a girl he loved but who kept him waiting.

The rather odd coexistence of upbeat traditional songs alongside romantic ones in Volcy’s repertoire has won him a 2-strand fan base with women preferring his romantic songs and the men his traditional Creole beats.  His fan base stretches beyond the national frontiers of Seychelles as he is immensely popular in Mauritius and among the Creole Diaspora in Europe.

Volcy has had an impact on Seychellois society well beyond the sphere of music although the latter was the conduit to it. He actually enriched the Creole language with some new expressions and concepts. One of them is “leve-debourye” which loosely translates into “wake up, do something” or “be useful”. Prior to him coping the word “leve-debourye”, that expression existed in the form of a mouthful sentence like, “Leve, al debourye” but after the song he wrote for Antoinette dodin became a him, everybody switched to his neology.

Lately Volcy has retired to a more behind-the=scene role scouting for young budding talents and promoting them. One of such great talents is Antoinette Dodin. But Volcy will soon make his musical comeback promising to give the traditional Creole beats a more rustic touch by working with acoustic rather than electronic sounds. Another project he has in mind is to set up a school to assist young artistes in honing their talents.

Volcy can indeed claim that he “came, saw and concurred” because he “came” to this world in place and time that destined him to be the great artiste he is today.  His upbringing led him to be sensitive to his environment and he “saw” what was going on. He “concurred”  to his mission in life when he took the Creole music to international fame.