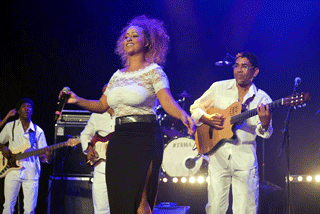 In La Reunion Island she teamed up with Damien Amable to support each other in duos and their combination has been regarded as a success.>

Sandra Esparon starts her interviews with the press with “I am Sandra, I am 23 years old and I was born in Seychelles”. Sandra is doing for her country what many should be doing:- working to continuously increase the visibility of the Seychelles. She is good at what she does and the country believes in her ability and professionalism.

Seychelles are islands that depend on tourism as the pillar of their economy and the work to keep Seychelles in the forefront is a responsibility every responsible Seychellois is doing. Sandra Esparon is the latest personality of these mid ocean islands to make her mark on the international scene and in so doing attract press coverage to make Seychelles more seen and more known.  This is one of the only ways for these small islands to fight the might of commercial advertising by bigger and richer tourism destinations. Positive press is obtained through talents such as Sandra Esparon from Seychelles taking the world by storm. 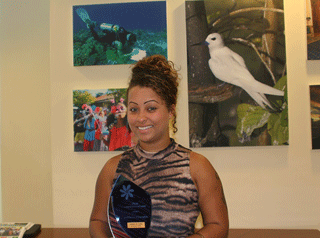 To a degree Sandra Esparon is a perfect addition of the work the island’s current Minister for Tourism is doing through delivering Key Note Addresses at important Tourism Forums. He has managed to put Seychelles on the map and followed on work started many years ago by James Mancham the then Prime Minister of these islands (a British Colony then) to launch tourism after the construction of the Seychelles International Airport.

Seychelles need more Sandra Esparon to make news to keep these beautiful islands in the press. Her work is replacing promotional Bill Boards and large advertorials. She is a fresh look for the islands and should be watched closely as she can go far. With her Dezil Group she has already toured France and made most Radio and TV Stations.

(Seychelles News Agency) – Barely a week after being named the Best Female Artist for 2014 during the Seychelles Airtel Music Awards held on March 28 in the island nation’s capital of Victoria, well-known Seychellois singer Sandra Esparon was back on stage showcasing her talent and earning recognition for Seychelles’ music.

Sandra was in the French capital of Paris on Sunday April 5, sharing the stage with female artists from the Indian Ocean islands of Reunion, Mauritius, Rodrigues and Madagascar.

They had all been invited to perform in a concert dubbed ‘Les Divas de L’Ocean Indien’ (Divas of the Indian Ocean), the first ever such concert held in the music hall of ‘Casino de Paris’. 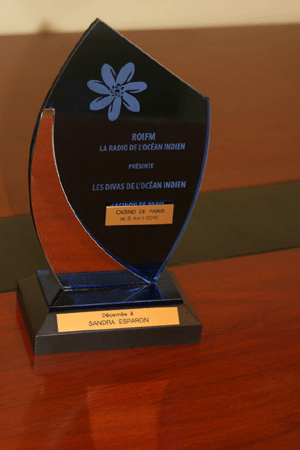 On top of getting the opportunity to promote their respective countries and music, they were all presented with a trophy at the beginning of the show, rewarding their participation and achievement in their musical career.

In an interview with SNA on Friday, a day after she got back to Seychelles, Sandra said they were not expecting the recognition while adding that it meant a lot as it shows that Seychellois music, as well as music from the Indian Ocean region, is being recognised and appreciated.

“We never hear music from the Indian Ocean, either from Madagascar, Mauritius, Seychelles or Reunion. So I said why not promote the Indian Ocean,” Gowry said in a report by a French television channel posted on YouTube.

Sandra Esparon who celebrated 10 years in music last year made her debut with the group ‘Dezil’ in 2005, with hit single ‘San Ou (La Rivière) which was released in France by Sony Music, selling more than 500,000 copies and becoming the summer’s most played music video on French television.

“I have performed in France before with Dezil but this time it was different because I was performing solo and alongside other female artists from the Indian Ocean, so it was an experience for me,” said Sandra who noted that there were Seychellois nationals among the crowd.

Sandra has during her music career worked on producing three albums and has won at least six awards locally and internationally.

Commenting on Sandra’s achievements thus far, her Manager and Producer, Patel Esparon who is also her father says the young singer has the backing of a group of people supporting the different aspects of her career on top of her own devotion to music.

The recent trip to France has also been an opportunity for Sandra to develop new cooperation and is already considering collaborating with a new and upcoming French artist. The 25-year-old is also hoping to release at least two singles before the end of the year among other plans.

“For me music is not simply a form of enjoyment but rather a career and I would like to see more young potential singers especially women who are still reluctant, to come forward and showcase their talents,” concluded Sandra.